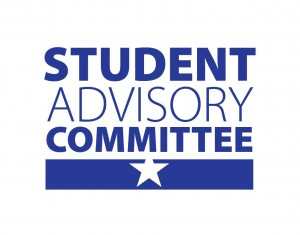 Below you will find an outline of the Student Advisory Committee’s meeting on October 16, 2019. If you have any questions, do not hesitate to ask. You can reach me at bangco@kkpsi.org or the whole committee at studentadvisory@kkpsi.org.

Below you will find an outline of what took place during the September Student Advisory Committee meeting on September 13, 2019. Ema Alexander of the NED took notes for the meeting. If you have any questions, do not hesitate to ask. You can reach me at bangco@kkpsi.org or the whole committee at studentadvisory@kkpsi.org.

Following our 2019 National Convention in Stillwater, Oklahoma we were left with two vacancies for District Governors and two positions were replaced due to election/appointment.

In the Midwest District, Tony Falcone (Life – Eta Omicron) has been appointed our 2019-2021 National Vice President for Professional Relations after twelve years as a District Governor.  This vacancy was filled by Jennifer Pitts-Taylor (Life – Gamma Theta).  Jennifer was recently a member of the Alumni Association Board of Directors and helped build the model we use for alumni-centered programming at our District Conventions.  She also served on our National Curriculum Committee and brings that work and her background as a leader in Chi Omega Sorority to the role.

In the Northeast District, Marie Burleigh (Life – Omicron) has been the longest-serving District Governor in our Fraternity’s history and began in that role on July 1, 2000.  Marie will be cycling off this year as she helps mentor the new Governors in the District.  In her place, Sarah Fitzgerald (Life – Iota Delta) was appointed this July.  A long-time leader in the Northeast District Alumni Association, she has been involved in the work of our alumni association for more than a decade and last biennium she served as a Curriculum Advisor as well.  This July, Sarah was awarded the Scott Stowell Alumni Excellence Award for her work in the Northeast District.

Following his election to the office of National Vice President for Programs, Michael Napolitano (Life – Kappa Upsilon), will no longer serve as a District Governor in the Northeast District.  After a long search I am pleased to appoint Dr. Brad Townsend (Alpha Epsilon) to the position of Northeast District Governor.  Brad is the Director of Bands at the University of Pittsburgh and has worked with the chapters there since 2013.  Prior to that, he was the Sponsor of the Theta chapter and for five years (2008-2013) served as Western District Governor.

A short time after the close of the 2019 National Convention, Latrondrick Hunter (Life – Zeta Eta) decided to step down as Southeast District Governor.  We know the decision was not easy and we are honored by his work and passion for our organization.  Following a long process where I was able to talk to an incredible slate of alumni leaders in the district, I have appointed Kalem Graham (Life – Zeta Psi) to serve as Southeast District Governor.  Kalem is the Director of Bands at Dudley High School in Greensboro, North Carolina, and was previously Assistant Director of Bands at Langston University.  From 2015 to 2018, Kalem served as a Southwest District Governor and during that time served on our National Nominations Committee.

We will be updating our National Website soon with their contact information as we continue our transition into the new biennium.  Please join me in welcoming and celebrating these new members of our National Leadership Team and thanking the four incredible individuals who served as District Governors last biennium and continue to serve the organization and model our values.

In 1947, at the National Convention in Stillwater, Oklahoma, the National Chapter of Kappa Kappa Psi recognized brothers who were killed in action while serving our country during World War II. They created a memorial recognition knows as the Gold Star.

As part of our centennial year celebration, the National Council continues this honored tradition during the 2019 National Convention. Brothers will be recognized in the following manner:

Certificates for the Blue Star Recognition and White Star Recognition will be issued to the Brother’s home chapter following National Convention. The home chapter will then be responsible for issuing those certificates to the individual Brothers. All categories of recognition will be memorialized by the Brothers’ respective District Presidents during the 2019 National Convention in Stillwater, Oklahoma and recorded in a memorial resolution in the convention minutes.

If you have names you would like to submit to be recognized this summer at National Convention in Stillwater, OK, please complete the form here.

As we prepare for our 2019 National Convention and Centennial Celebration, we are also preparing our Fraternity for another 100 years of serving college and university bands.  There are so many ways to give back to Kappa Kappa Psi and help us collectively serve as “Founders” for our next century.   I invite you to register for National Convention and the Centennial Celebration, check out the history of the Fraternity and what a century of service looks like, and I strongly encourage you to support our student Brothers and Sisters financially to make sure they can be part of this truly once-in-a-lifetime moment for Kappa Kappa Psi.  I know I will be sending money back to my home chapters to help support the active Brothers and Sisters who wish to attend National Convention and the Centennial Celebration.

Our National President, Evan Thompson, often talks about the incredible importance and life-changing power of giving back to support others.  The Servant Leader.   I wanted to extend an opportunity to each of you to give back to Kappa Kappa Psi.

As part of this national call for volunteers, below is an application for those interested in serving.   We will be looking for brothers interested in serving as District Governors, National Committee Members, Colony Advisors, Curriculum Advisors, Speakers, and more.   I will start reaching out to brothers in June who are interested in volunteering as we work to fill these responsibilities for the coming biennium.   Most of these roles do not involve a significant time commitment and you’ll see information on what kind of commitment these roles require, whether traveling may be involved, and our volunteer expectations.  We want to support you personally by respecting the fact that you may have other obligations and responsibilities, and you’ll see plain information on the commitment you would be making by serving.  We don’t want to place a Brother in a position where they shirk their duties and responsibilities.

This biennium we were surrounded by the “Founder’s Spirit” and the history and great work of our organization as we approach a century of service.   Now we have the responsibility of doing whatever we can to build the foundation for the next one hundred years.  I hope you will look at ways you can donate your time, your talents, your treasure, your enthusiasm, and your support for our mission.   Every collective contribution moves the Brotherhood forward.  I am excited to see so many of you in July and beyond as we all Strive for the Highest.

After dedicated work by the 2017-19 AABOD, it is my pleasure to announce that KKPsiAA members will elect their next Board of Directors for the first time in 2019. Following the call for candidates that was issued in November of 2018 and concluded on January 15, 2019, the following Brothers provided candidate applications and have been deemed eligible for election to the AABOD:

Candidate information will follow online, and printed material will be available at each District Convention. Registered members of the National Kappa Kappa Psi Alumni Association will be able to vote for up to eight (8) Directors. The vote will be conducted online, and results will be announced shortly thereafter. As a reminder, you can still join the Alumni Association for the 2019 year.

I want to thank each of our candidates for offering themselves in the service of our great Fraternity.

The National Committee on Nominations met on Sunday January 27th, 2019 to review all submitted applications and information for candidacy to the National Council and Board of Trustee positions.  The committee determined the following individuals are eligible as candidates:

National Headquarters has begun production of the 2019 National Convention Elections Newsletter which will be posted online and distributed at district conventions this spring.  The National Committee on Nominations will continue its work reviewing and interviewing the candidates and produce a slate at least 30 days prior to National Convention (by rule of the National Constitution).  If you have any questions about the nominations process please don’t hesitate to contact me, or NHQ Staff. 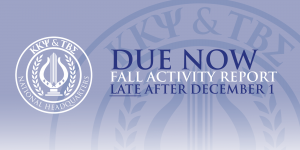 The Fall Activity Report is due by December 1, 2018. Please make every effort to submit this report on-time. Reports are considered late after December 1st. If you have any questions, please contact the National Headquarters. 405-372-2333 or kkytbs@kkytbs.org.

It is my pleasure to announce the appointment of Andy Melvin to the position of Southwest District Governor for Kappa Kappa Psi.

Andy was initiated into the Delta chapter at the University of Oklahoma in 2010. He served as Vice President of Membership and President. After graduating with a degree in International Studies in 2014, Andy was hired as a National Chapter Field Representative for the fraternity and traveled across the country visiting chapters and attending professional events for two years. Andy has continued to serve the fraternity as a Curriculum Advisor and as a member of the Ritual Performance & Education Committee. Professionally, Andy is a District Executive for Boy Scouts of America working primarily in Edmond, Oklahoma and the surrounding areas.

You can send congratulatory messages to Andy at andrewbmelvin@gmail.com.

Congratulations to Andy! Please welcome him to the National Leadership Team!

It is my pleasure to announce the appointment of Arupa Gopal (SED) and Bill Welch (NED) to the position of District Governor for Kappa Kappa Psi.

Bill Welch was initiated into the Eta Omicron chapter at James Madison University in 1989. He holds a Bachelor of Business Administration degree in Business Management with a focus in Human Resources Management and Finance from James Madison University. Professionally, he serves as a Branch Manager for Unify Financial Credit Union/Western FCU. Bill is currently serving the fraternity as a Curriculum Advisor and as a member of the Centennial Committee. He will be joining Marie Burleigh and Mike Napolitano as a Governor in the Northeast District.

You can send congratulatory messages to Arupa at agopal@kkpsi.org and Bill at wbwelch67@gmail.com.

Congratulations to both of these outstanding brothers! Please welcome them to the National Leadership Team!