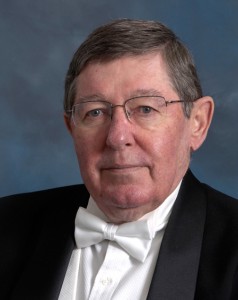 college band community in mourning the loss of Prof. James “Jim” Copenhaver,who passed away on November 26, 2014. Director of bands emeritus at the University of South Carolina since his retirement in 2010, Copenhaver first joined the faculty there in 1976 after teaching previously at Holmes High School in Covington, Ky., Morehead State University; and Clemson University.

At USC, Copenhaver conducted one of the finest wind ensemble programs in the nation; notable performances included conferences of the Music Educators National Conference, College Band Directors National Association, and American Bandmasters Association. He also taught and later oversaw the Carolina Band, known as the “Mighty Sound of the Southeast.” Copenhaver also founded and co-conducted the Palmetto Concert Band, an acclaimed ensemble of semiprofessional musicians in Columbia, S.C.

Copenhaver was an elected member of the American Bandmasters Association and also served as past-president of the National Band Association and Southern Division president of the College Band Directors National Association. He was inducted in the South Carolina Band Directors Hall of Fame in 2003. Kappa Kappa Psi twice honored Copenhaver—with the fraternity’s highest award, the Distinguished Service to Music Medal, during the 1989–1991 biennium; and with the Bohumil Makovsky Memorial Award in 2009.

In 2012, Copenhaver donated a major endowment to the University of South Carolina School of Music, providing scholarships to USC band students in perpetuity. In 2013, the university renamed its state-of-the-art marching band facility in his honor.

Prof. Copenhaver’s work as a musician and educator lives on through the thousands of students he taught and influenced.