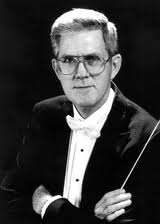 Dr. Croft finished his Ph D. from the University of Oklahoma in 1970 and was hired as the director of band at the University of South Florida in 1972. After eigth years at USF he became the Director of Bands at Florida State University and remained there until his retirement in 2003. Dr. Croft’s high school program was selected as one of the groundbreaking Contemporary Music Project ensembles supported by the Music Educator’s National Conference and the Ford Foundation in the 1950’s. He also served as the president of the National Band Association and the College Band Directors National Association. He was also active in the forming of World Association of Symphonic Band Ensembles (WASBE) as a member of their board for 6 years. He was revered as a musician, composer, and clinician working with countless ensembles and composers. He truly was a legend in the college band arena.

Dr. Croft served as an example, leader, and mentor for countless brothers and band directors across this country. He truly lived up to the high ideals of our fraternity. Our most sincere condolences are with his family and the Florida State University Community.