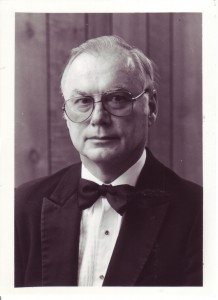 Kappa Kappa Psi joins The University Missouri – Rolla college band community in mourning the loss of Dr. David Oakley, who passed away on September 10, 2015. Dr. Oakley served as a professor of music at UMR for 33 years before his retirement.  Dr. Oakley’s involvement in Kappa Kappa Psi began in 1960 with an honorary membership in the Delta Gamma chapter.

However, his involvement was not limited strictly to the UMR campus, Dr. Oakley also served as District V Governor (1975-77), National Secretary/Treasurer (1977-79), National Vice President (1979-1981) and as the installing officer for a number of chapters including Eta Upsilon, Theta Rho, and Eta Pi.  As a cap to his service, Dr. Oakley was elected to the position of National President of Kappa Kappa Psi in August 1981. During the 1981-83 biennium, a formal chapter visitation program was instituted. At Dr. Oakley’s request, the position of Second Vice President (currently known as the Vice President for Professional Relations) was restored to provide visibility with the band profession. Dr. Oakley addressed the idea of ‘long life’ in a prospective member’s thinking, emphasizing full participation in college band and the fraternity until graduation.