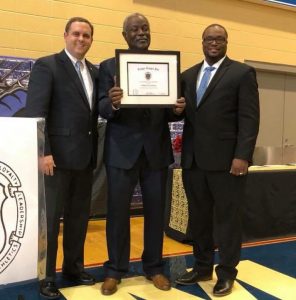 Congratulations to Mr. Edward E. Crenshaw on receiving the Silver Baton Award! Mr. Crenshaw is a charter member (1967) of the Epsilon Gamma chapter at Alabama State University. After a brief stint in the Birmingham Public Schools, Crenshaw was drafted into the army. In the army, Mr. Crenshaw served as a musician for the 82nd Airborne Army Band, and was later transferred to the 82nd Airborne Army Choral Division where he served as music director. After completing his military service, he returned to Birmingham to become band director and head of the music department at Ramsay High School. Earlier this month, Crenshaw was honored by Ramsay High School for his 40 years of service as a music educator by naming the new band facility in his name. Southeast District Governors, Craig Aarhus and Latrondrick Hunter, presented the award on behalf of the National Council. Kappa Kappa Psi congratulates Mr. Crenshaw on his years of service to bands!

The Silver Baton Award is intended to recognize individuals for their longevity and continuous quality service to bands. Chapters are able to present this award at local concerts, state music conventions, and/or special public gatherings. Any chapter with the approval of its sponsor and Director of Bands may select and present the award. Chapters may find the Silver Baton Award Application Form at www.kkpsi.org under “Fraternity Awards”.