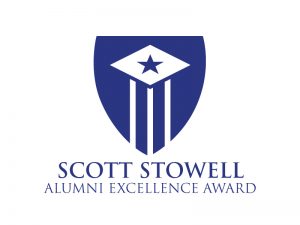 The Scott Stowell Alumni Excellence Award recognizes the continued dedication and service to Kappa Kappa Psi by alumni brothers who are neither elected nor appointed members of the fraternity’s National Leadership. The Kappa Kappa Psi Alumni Association seeks to recognize unsung heroes who exemplify the honor of service within our fraternity through their devotion of time, energy, and spirit while volunteering as advisors, mentors, and role models, their professional advice and networking support to other members of our fraternity, and their encouragement of active brothers toward greater participation and growth in band programs and as members of Kappa Kappa Psi. The Kappa Kappa Psi Alumni Association will confer the award to one recipient once per biennium, with this recognition made at National Convention.

Alumni members, including life members, become eligible five years after they transitioned to alumni status. The fraternity’s District Governors, National Officers, Trustees, and KKPsiAA Board of Directors members are ineligible for two years after they last held any of these leadership positions.

Kappa Kappa Psi chapters, local alumni associations (LAAs), and individual alumni from either Kappa Kappa Psi and Tau Beta Sigma may make nominations for this award.  The submission deadline for nominations is May 15 of odd-numbered years (as National Conventions occur on such years).