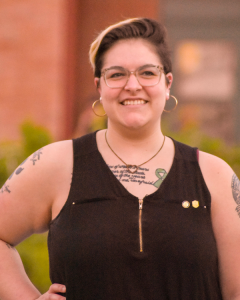 Mariessa Robles (she/they pronouns) is a two-spirit, non-binary individual from the west coast and an alum of the Iota Kappa Chapter at Boise State University. During their time as an active member they served as a drum major for the Blue Thunder Marching Band and as Ritual Chair, VP of Service, and President for their chapter. Mariessa is currently living in New York and pursuing a doctoral degree in Clinical Psychology from LIU Post. They are particularly passionate about the intersection of mental health, team building, and leadership.  They enjoy living in the city and being involved in many social justice movements–namely in the scope of queer and indigenous liberation. Since 2018 Mariessa has also served on the staff team for the Scott Reese Leadership Camp–a summer camp in Oregon for high school marching band leaders–and loves traveling home every summer to work with amazing students.