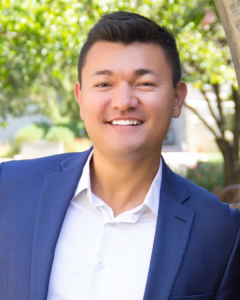 Prior to his election to National Council in 2019 as VPSA‭, ‬BANG CO has served as Chair of the North Central District Alumni Association and President of the North Central District‭. ‬He also served as the President of the Alpha Zeta Chapter at Indiana University‭, ‬where he was initiated in‭ ‬2012‭ ‬and graduated with a Bachelor’s of Science degree in Kinesiology and Exercise Science‭. ‬During his time at IU‭, ‬Bang maintained a high level of involvement on campus‭, ‬including two years as the Drum Major of the IU Marching Hundred‭. ‬As a Life Member of the AZ Chapter‭, ‬Bang also holds Honorary Membership with the Northeast District, Western District, Southeast District, Southwest District, ‭North Central District, and the National Chapter of Tau Beta Sigma. ‬

Outside of his professional life‭, ‬Bang enjoys spending his time volunteering and getting involved with other organizations‭. ‬He is particularly proud to serve as the DEI‭ ‬&‭ ‬Community Outreach Director for the DC Chapter of the National Association of Asian American Professionals‭. ‬Additionally‭, ‬he also spends his summer as a leadership speaker for the Crossroads Drum Major‭ ‬&‭ ‬Leadership Clinic‭. ‬

As National Vice President for Membership & Expansion, Bang is directly responsible for expansion, membership education, and policy violation allegations in the fraternity. He is a member of the National Curriculum Committee, and reviews activity submissions for The Road to Wisdom.  Bang works collaboratively with the National Chapter and Expansion Education Coordinator to birth new chapters of Kappa Kappa Psi, and works with struggling chapters to help bring them back to active status.  In addition to these duties, he oversees the Chapter Field Representative Program, and is responsible for coordinating the National Leadership Conference for student leaders in the fraternity each summer.  By vote of a simple majority, Bang will advance to the position of National President at the 2023 National Convention.